It has become clear to me that I am far more concerned about the Ghomeshi trial than most of the people I know. I can partly explain that by admitting my (thwarted) childhood ambition was to be a lawyer. I have always been fascinated by rules and by how people follow, or don’t follow, those rules.

I have also always been a woman. Which leads me to consider what being a woman means.

The difference between the way my grandmother had to live her life, the way my mother coped, the way I am living, and the way that young women today conduct themselves is striking. Some things have progressed, but some still lag. The reason for the lag is that so many of us are behaving the way we were raised to behave in the past, yet we’re all living together in this same moment in time. How  my grandmother, my mother, myself, and my niece would react to a scenario like what is alleged to have taken place between Jian Ghomeshi and his accusers could be very different.

As a culture as we’ve raised successive generations of women in progressive environments. These women will have less internal conflict when it comes to sexual assault. They’ll be confident that it was assault because they will have always been raised that they are their own master. They will be less likely to try and smooth things over afterwards and quicker to go to the police. They will have been raised to know since the man committed the crime, that they don’t have to fix anything and the law has an obligation to address the crime.

A huge part of our progress lies with men. The world is changing for them so rapidly.

Never before in human history have men been held so accountable for their behavior. Never before have men been expected to be as aware and as fair about sex as they are now. Sex is no longer only for and about men. The sexual ground has shifted beneath men’s feet in two generations.

For many, many men this shift makes little to no difference because they never felt like sex was something they were entitled to. For other men, there are some bad lessons to be unlearned.

We need to stop seeing sex as a transaction between agressive male and passive female. We need to stop thinking women will lie because sexual arousal is not their natural state, and men will be tricked because men are in a constant state of sexual arousal. When women aren’t emberassed (read: shamed) by the details of their sexual behaviors, there will no longer be any reason for them to obscure what happend and not only will that make real life relationships happier, it will make these sort of trials much easier to sort out.

We need to see sex in the moment, and not as one domino in a long line of behaviors. Nothing leads up to sex for certain, and the outcome of sex is not predetermined. We have to take ownership and responsibility for what we are doing as we do it. Men must, and women must be allowed to do so.

No matter the outcome of the Jian Ghomeshi trial, there is no going back. A conversation has been started. Our culture is shifting. Our laws are adapting. As horrifying as this whole trial has been, I believe this is a very good time and place to be a woman because we are progressing. 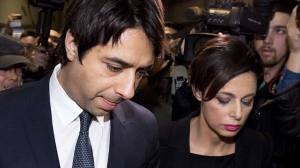