So topic of the day has to be the pie. Look at this political poster. 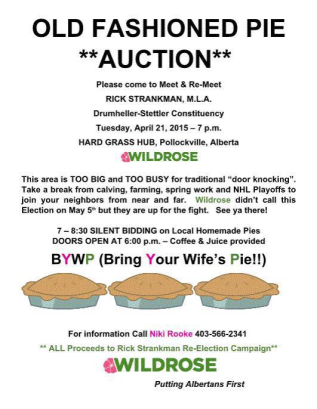 I know it can be subtle, but sexism in politics is a real problem. It seems minor in the same way that low dose daily exposure to a carcinogen seems minor. Sexist stereotypes interfere with the ability of women (and the non cisgender, non heterosexual members of our communities) to fully and confidently participate in political life. I am only able to personally address how it affects heterosexual women, but I know that other communities suffer the same type of ill effects.

Let me tell me what is NOT wrong with this poster and get that out of the way. Reaching out to people and creating community is very constructive. Calling people together to participate in the democratic politic process is admirable. And in my personal opinion, pie is the ultimate dessert – nothing beats a fresh apple pie with a good homemade crust.

What’s WRONG with this poster?

It is pretty clearly an invitation to men. Which, in and of itself, is perfectly acceptable. It can be acceptable to target specific audiences if you are addressing issues and concerns specific to that audience. For instance, is acceptable to exclude teenagers from a conversation about seniors housing …

… UNLESS that info is being handed out at a political rally during an election. I will explain that later.  The acceptability of the exclusion is negated by the tone and underlying message of the information that goes along with the invitation.

Then there’s the ‘Bring your wife’s pie’ part. That is truly insidious. So much is between the lines of that text. Have your wife make a pie for you to bring along, it’s OK as the man of the house you are entitled to use her labour for your own gain. Of course she makes it, women cook, you couldn’t bake your own pie as you are too busy farming and calving and doing man stuff. It also somehow manages to neglect to include the wife in the meeting, almost as if it too manly for her; this politcking is man stuff. Bring her pie with you and learn important political man stuff and then go home and share your new knowledge with the little woman. It harkens back to a dark time for gender relations that we really should not be nostalgic for.

The poster doesn’t leave open the door for anything outside the straight male marriage in which the man does man stuff (like politics) and the woman bakes pies. I admit, it doesn’t close the door on it either, but it is intimidating to see one section of our population ushered through a door while we are left to open the door for ourselves (because they legally can’t actually keep us out). The poster paints a very narrow view of society that serves to exclude people who don’t fit that mould. AND THAT is not appropriate during an election campaign.

Everything about and all the information pertaining to policy, platforms, plans and intentions should be be made as broadly available as possible during an election. During the democratic process there is no room for the politics of exclusion.

During an election  not only do people get to do what our society grants them the legal and moral right to do – choose for themselves how they live, who they love, how they work and what they believe in – they get to decide who they will vote into office to make decisions about how free they are to continue doing those very things. There can be no exclusion at any point in the democratic process.

This isn’t like not letting men in the women’s change room. This isn’t like having men only baseball teams. This is the very core of how we currently define and continue to evolve ourselves and our society.

I hope I’ve made my point. This may be my fastest blog yet.

For fun, watch this video of the much respected Peter Lougheed if no other reason that looking back at it is creepy and feels wrong for reasons that are difficult to put a finger on exactly. That is how our kids are going to look at the above poster.

It’s subtle, but watch the men greet him at the door and the women stay inside the threshhold. At 1:15 he meets ‘Martha and Henry’. After the greeting Martha immediately goes back into the home and leaves the politics to the men  …  I don’t even know where to start on the go-go dancers at the end…