Here’s a story I have been telling people for 30 years: my mother named me Darcy so that when I applied for jobs no one would know I was a girl and for that reason not interview me. It’s an important story.

Darcy is a name without gender. It is the symbol of the world she handed me. She was confined by her gender. I was less so. I am my mother’s daughter, she is her mother’s daughter. That is how we move forward in time.

How far forward we have come is evident in what we are mourning at the same time as what we are celebrating things like gender parity in government, and a woman Premier in Alberta. Our society is only now mourning the last of a generation of women born before women were given the vote.

Before you freak out: not the generation, a generation.

We all know about intersectionality (now), but progress is is inherently imperfect. Imperfection does not invalidate the improvement, it simply makes the next necessary step all the more obvious. My mother was not perfect. I am not perfect. Being Darcy didn’t eradicate sexism, but the story of my name is a good story looking back at it.

This US election cycle is laying bare our mistaken tenancy to judge people’s pasts while looking forward. Improvements are very seldom self evident, frequently they are milestones only in context. And yes, I am talking about Hillary Clinton.

Hillary Clinton is my mother’s generation. I don’t get to vote for her, but I do have to respect the struggles she and my mother’s generation overcame for me. She is not the past, she cannot be compared to the future, but she is the foundation we are standing on today. Her nomination is absolutely and without question a milestone for women. You know, a feminist milestone. Not the last one I ever hope to see, but definitely a stop on the march to progress we should celebrate.

It is easy to see Hillary Clinton as a white, wealthy, christian member of the establishment and say that being a woman is not what has defined her journey. The ‘establishment’ Bernie rails against is male – very male and very white. It’s not every male, but it is male.

Hillary’s full membership in the establishment is a result of hard work and perseverance. The group of people who have access to the strings has broadened, and she has been part of that broadening. But she had to work to gain entry, and she has worked to give others entry – in neither case by opening the door to let them in, but by standing outside the door refusing to go away until they let others in. Not to disparage Bernie Sanders’ excellent record on civil rights, but he was opening the door from inside.

Hillary’s accomplishments and ideas were FOR THEIR TIME very significant. Her journey has been to clear the path for the next generation of women. By today’s standards she possibly pales only if you choose to judge from the place you stand without admitting you stand in a place she helped build. Scan a history book. She has weathered more scathing criticism based on her gender than I would ever want to have to endure. Don’t reduce her to what was not done when she was working doubly hard for her place at the establishment table, credit her for what she got done by using what influence she did have.

Is she perfect right now exactly as is? No. Should you not challenge her to reevaluate, to grow, to move forward? No. Of course not. But if you think you’re ahead of her you are ignoring how much longer she has been in this race than you have.

Are women’s rights human rights? If you say yes it is because she said that loudly in 1995. Over 20 years ago she had to formally announce what we can now assume. That was her doing what was not popular, and that pushed progressive discourse forward.

She is not going to be your saviour. She will lead a group effort. She won’t do it without you, your input is necessary. Which means you should be part of the progress she makes and can help her maintain the momentum. It isn’t a revolution. It is the continued march of progress.

Hillary’s nomination is a milestone exactly because it does matter is how high a woman can rise within an oppressive power structure. It is insulting to diminish that achievement because she isn’t more oppressed.

We must acknowledge that people are good in context, and allow them opportunity to improve in new context. Otherwise we can never admire anyone because, no one is ever intersectional enough. Effort matters, growth matters, ability to reevaluate matters. And they all matter more than getting it perfect the first time. She worked hard for what she accomplished, and she is still working and learning and growing.

Hillary will be a good tool for further change. She has always had to be a tool for change: imperfect change, halting and meandering and sometime mistaken attempts at change, but change nonetheless.

Many of Bernie Sander’s ideas also align with my world view. Had Sanders been ahead I would not have proposed he didn’t deserve the nomination because he was not a woman. I would judge him in context. He wouldn’t get credit for taking as many punches for being a woman in a man’s world, but obviously that’s because he isn’t and has never been a woman in a man’s world. 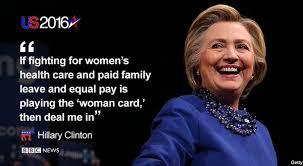 But the fact still remains that the fact that she is a woman means something to me, she gets credit for being a woman while in politics. She gets to play the woman card because it has been dealt to her over, and over, and over. And because of her some young woman somewhere is not being dealt the woman card. Some women still are, as I said, progress is imperfect.

Hillary deserves to be President. She deserves to be her imperfect, conflicted, battle scarred self. She is the woman card, and she is playing it yet again to spare you having to have it dealt to you.

Hillary is to Darcy, as history is to progress.